One of the key metrics when evaluating a radio for packet use is turn-around time.  This is the time it takes for the radio to switch from transmit to receive.  The turn-around time for a packet radio needs to be fast in order to hear responses from the other packet stations.  Most packet stations and digipeaters will reply within a few tens to a few hundred milliseconds from the time it received the packet.  When a radio takes more than 50-100ms to turn around, it will be difficult to catch the start of the packet,  sync with the preamble and decode.

Turn-around time has only become an issue again recently with the advent of RDA1846-based radios.

To test turn-around time, the KT-8900D was connected to a dummy load and to a Jetstream power supply.  It was powered on and set to low power.  STE, RP-STE and RPT-DL were turned off.  The unit’s microphone was plugged into its RJ-45 socket.

To perform the test I set up a test harness on a breadboard.  I plugged one end of a cable into the radio’s rear 3.5mm speaker/mic connector and the other end into a jack mounted on the breadboard.  I connected the sleeve of the jack to ground and connected the scope’s channel 1 to the audio output and channel 2 to the PTT line.

I steadily increased the time base on the oscilloscope starting from 1ms until I was able to capture the start of the audio signal.

So here is the horrible truth about the KT-8900D turn-around time. 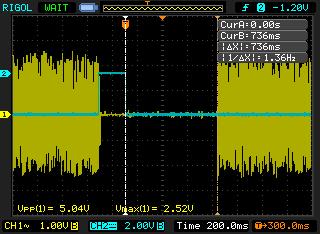 700ms turnaround time.  This radio isn’t going to just miss the start of a packet — it’s going to miss the entire thing.  This is bad.  Really bad.

This is worse than the Baofeng UV-5R, which has a measured turn-around time of 300ms.

This radio is wholly unsuitable for packet work, including APRS.